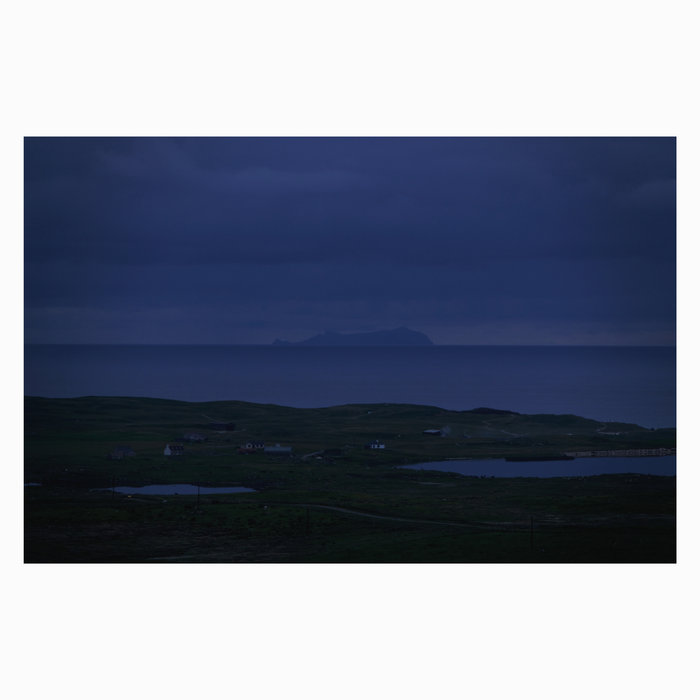 mikehoolboom Field recordings from the artist's Scottish adventure, you can hear the hours of waiting, the precision and care. Yes, it's wind and water, but each soft brush against the clothesline, each metal groan and protest is pronounced as if the beginnings of a new alphabet. Simone Weill, the mystic marxist, said that prayer was undivided attention. This album, like all of Bonnetta's work, is a prayer.
Favorite track: Innse Gall I.

Joshua Bonnetta - Innse Gall ‘The Islands of the Strangers’
Bridging acoustic ecology and interdisciplinary creative practice, Joshua Bonnetta returns to Shelter Press with Innse Gall ‘The Islands of the Strangers’, his second LP for the label. Recorded and assembled between 2017 and 2020 and acting as a companion piece to Bonnetta’s film, An Dà Shealladh ‘The Two Sights’, these two interrelated side-long works - Innse Gall I and Innse Gall II - respectively deploy a rigorous approach to field recording and auditory phenomena, pursuing the complex relationship between landscape, place, language, and culture in the Outer Hebrides, where both the film and album’s source material was gathered. Representing a radical rethinking of the potential of sound collage, Innse Gall ‘The Islands of the Strangers’, is issued by Shelter Press as a limited edition, deluxe vinyl LP, housed in a 7mm reverse-board outer sleeve and a heavyweight reverse-board inner sleeve, accompanied by a sixty page booklet containing extensive photographic studies made for ‘The Two Sights’ by the artist and an essay by Erika Balsom, as well as a postcard to download the film An Dà Shealladh ‘The Two Sights’, generously provided by Cinema Guild, and Arsenal - Institut für Film und Videokunst.
Since the late 2000s Canadian artist Joshua Bonnetta has cultivated a highly singular interdisciplinary creative practice that spans film, video, sound, performance, and installation. In addition to his previous LP on Shelter Press, Lago, he has released albums on Senufo Editions, Experimedia, and Canti Magnetici, and exhibited at The Berlin Film Festival, BFI London Film Festival, ICA London, MOMA, The New York Film Festival, Rotterdam Film Festival, Toronto International Film Festival, amongst others.

Bonnetta’s use of film, photography, and sound recording operate in close, generative dialog with each other; a photograph indicating the proximity and urgency of sound, a sound indicating the necessity for moving image, and a film utilising the ocular to forward a realm of sonority. Each discreet element of his output - a film, record, photograph, etc. - is regarded as autonomous while interconnected with, and dependent on, other realms of perception and experience; the artist and object acting as a subjective lens, inquiring after the nature of human experience and the diverse, latent psychological realities at juncture of inherited history, culture, place, and self. It is a responsive practice, emerging out of an encounter with place and circumstance, that attempts to give order to the chaos and abstractions that cause the mind wonder, and give way to legend and myth.

While very much the byproduct of sound collage, rather than the states of abstraction and ‘pure’ sonority most often pursued by musique concrète, or an experimental music “free of individual taste and memory (psychology)”, as pursued by John Cage, Bonnetta’s work displays a deeper sympathy with Luc Ferrari’s notion of ‘anecdotal music’, in which the social and autobiographical contexts of the source material / recordings - with their embedded dimensions of meaning - is accounted for and retained. Rather than enforcing a fixed vision of the artist, the listener in encouraged construct a narrative of their own. This is no less the case for Innse Gall ‘The Islands of the Strangers’, comprising two audio works constructed by Bonnetta from field recordings made on the Outer Hebrides islands of Barra, Berneray, North Uist, Harris, & Lewis between 2017-19.

Drawing upon Bonnetta’s fascination with sound as a primary means to survey place and people, Innse Gall ‘The Islands of the Strangers’ draws upon a vast range of sonorous material: hydrophone recordings made over extended periods in lobster creels and of gases escaping a peat bog, interview fragments, and field recordings feature capturing the sounds of maritime industry, song, seals, corncrake, snipe, and other elements of the natural world. Meticulously collaged and reworked within an exploration of the interrelated acoustic ecology of these diverse elements of the islands’ make-up, the album’s two works - Innse Gall I and Innse Gall II - bristle with the subcutaneous narratives embedded within these ancient and modern landscapes, played against the disappearing Gaelic oral traditions which hold their memories, resulting in a deep, auditory reflection on the relationship between narrative, environment, and the reciprocal influences they exact upon one another.

Challenging the perceived boundaries and interconnectedness of place and occupation - to what extent the perception of an environment is modelled by language, culture, and myth, or that the environment underscores the very becoming of those things - Bonnetta’s Innse Gall ‘The Islands of the Strangers’, draws profound poetry, beauty, and meaning from the everyday, rethinking the terms of field recording and sound collage every step of the way.